Read the full article at www.bhpioneer.com. 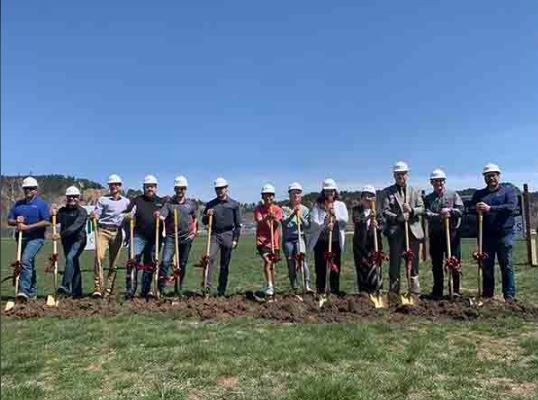 SPEARFISH — Construction and school officials, and a couple high school students, marked the start of building the new career and technical education center for Spearfish High School Tuesday afternoon during a groundbreaking ceremony.

“We’ve been waiting on this for a long time,” said Kirk Easton, superintendent of the Spearfish School District. “COVID put it on a pause. I’m glad we picked it up and started running with it. I appreciate everyone’s work.”

“This is a momentous day for us. A very exciting project,” said Joe Hockett, business development manager for RCS Construction, the company hired as the construction manager at risk.

Principal Steve Morford said discussions on whether to construct the center began about four years ago with serious discussions over the past two years.

So there’s the bad news.

The good news is that the school will begin moving into the new 58,000-square-foot facility that fall.

Added will be a medical science program, computer lab where perhaps robotics and automation aspects can be added, building trades — a class where students construct a home, automotive technology, and an additional classroom that will be a flexible use space.

Easton said that space can be used for additional classes and in particular instruction in tourism and hospitality, law and public safety, and other high-interest classes students select.

For years, the schools throughout South Dakota, and nation for that matter, have pushed students toward obtaining a four-year degree. However, there has been a nation-wide shift.

“It’s really left a labor shortage in a lot of these skilled trades,” Easton said. “We still want to prepare kids for a four-year university, but we also want to give those kids, who are not (seeking a four-year degree), an appropriate education that will allow them to be successful to go into the world of work or a technical school.”

Easton, a former CTE instructor, can discuss the possibilities at length, and his enthusiasm is infectious.

He said he hopes to use local contractors to come in and talk to the students about the building trades such as carpenter, plumbing, HVAC, etc.

“It’s going to expose our kids to so many more opportunities than what they are being exposed to right now.

He pointed out the new auto shop classes.

“While we will teach our kids about where our automobiles come from and where they are now, the thought of teaching kids about electric vehicles, how they’ve advanced and where they’re going, I think of that and think, ‘what kid wouldn’t want to learn about that,’” he said.

The new classes stem from surveys completed by students.

The current CTE line-up of classes likely will not be able to accept more students into the program; however, the expanded spaces will allow them to “not trip over each other” while working, Morford said.

“Some kids are completely convinced they are going to go do ‘X’. They do it and say, ‘that’s not what I expected. I’m not going to do that anymore,’” he said.

Morford added that the district wants to create an awareness of different fields for students rather than to push them in a certain direction.

“Not every kid has to go to a four-year school. Tech schools have great programs and offer great careers. We want kids and families to understand that,” he said. “We are not trying to take away four-year college. We’re not trying to push kids into tech school. We are trying to prepare kids as best we can do so they can go out and do anything they want to do when they graduate.”

For Western Dakota Tech, that might be courses allowing students to work toward their licensed practical nursing degree, and for Black Hills State University it might be classes working for their tourism and hospitality degree.

“It’s about exposing our kids to those programs and their instructors,” Easton said. “We, as a school district, are excited to bring more rigorous, hand-on learning opportunities to kids to explore more options for their career.”

Read the full article at www.bhpioneer.com.